For those who celebrate Halloween—and those who don’t!

Although Halloween has pagan Celtic origins, Apple O’Lantern uses the original letters of Psalm 17 for strokes to refer to spiritual concepts of Christian and Jewish faiths– as does its unique image.  Look closely at the image and you can see some of the Torah font alpha-numeric symbols and traces of others.

While most Halloween traditions have origins that are not Christian or Jewish, the Jack O’Lantern can be traced to the Irish legend of Stingy Jack who tricked the Devil (as in both Jewish and Christian theology) into climbing a tree and then entrapped him by carving a cross in that tree. In retaliation, the Devil put a curse on Jack condemning him to wander the earth at night with only a light from within a carved out turnip, symbolizing a head.

In the New World, where pumpkins were plentiful and much easier to carve than pumpkins they were quickly substituted for carved turnips. 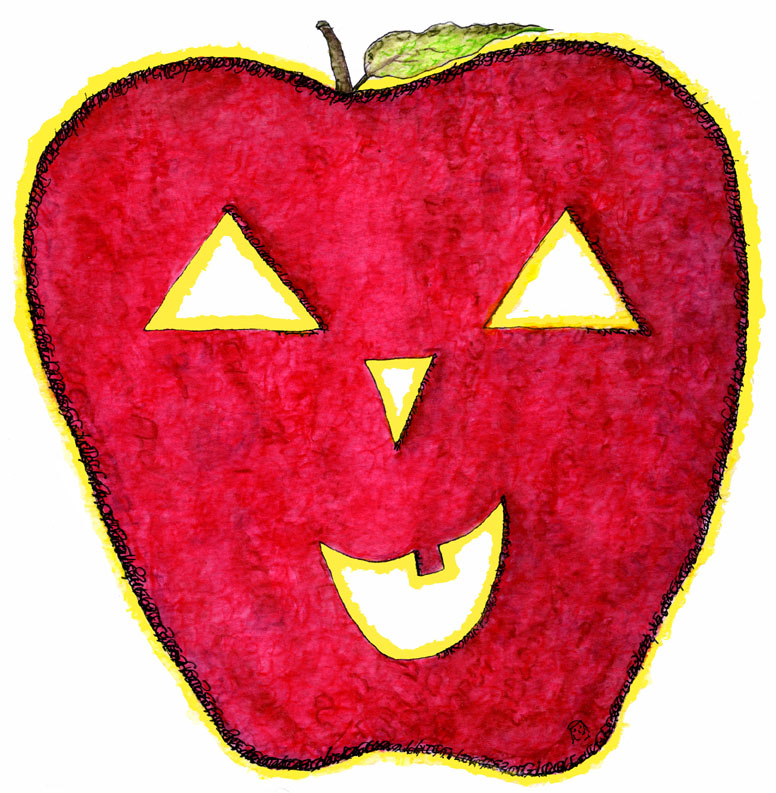 The first time the concept of “Apple of God’s eye” appears in the Bible is in Deuteronomy XXXII, 10 as part of a song spoken by Moses: “He found him in a desert land, and in the howling waste of the wilderness; he encircled him, he cared for him, he kept him as the apple of his eye.”

A second reference says: “That which one holds dearest, as in ‘You’re the apple of my eye.’ The phrase is from the Bible (Deuteronomy 32:10), which says the Lord kept Israel “as the apple of his eye.”

Psalm XVII, 8 uses the concept as a kid of prayer request:  “Keep me as the apple of the eye, hide me under the shadow of thy wings”.

This happy Apple O’Lantern celebrates being the apple of His eye, the harvest and fits in perfectly while proudly upholding the Christian and Jewish traditions during the fall and harvest celebrations.

Shirts, sweatshirts, bags and items that feature this image but do not quote the Bible or refer to it with added English texts are legal and suitable to wear of bring anywhere, including places where outward expressions of faith are not welcomed, such as public schools since the image of a smiling Jack O’Lantern apple is not recognized as religious, as, for example, Noah’s Ark is.

Apple O’Lantern (Psalm 17) introduces a new art series featuring Post Conceptual UnGraven Images especially for children. This has also been requested time and again by collectors of the fine art prints who have hung smaller prints over the cribs and in the rooms of their kids as a form of blessing.