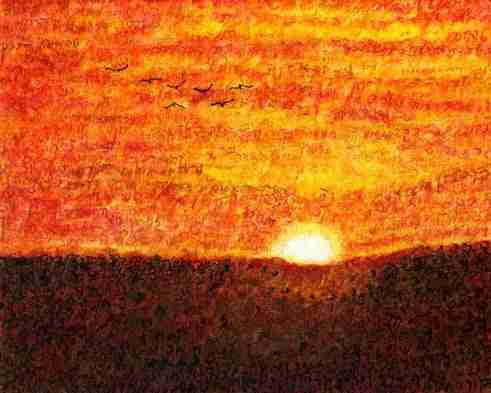 In my Genesis: Sunset series of paintings, there are many works of sunsets and sunrises over the bays and ocean beaches that are local for me. I have been fascinated with the reflection of the setting sun and the path of light that extends upon the water ending straight to the viewer.

In Judeo-Christian theology the Hebrew word for waters (pronounced: Mayim) is used in Genesis to describe the waters below (the waters of the earth), while the word for Heavens (pronounced: Sha-mayim) is used for the waters above. So when the Lord separates the waters above from the waters below, He separates the Mayim from the Shamayim. The Hebrew letter shin precedes the word Mayim changing the meaning to heaven(s). Shin represents fire and light, which of course comes from the heavens, as we see the lights of the sun, moon and stars.

Within the Jewish tradition, and therefore also Christian theology, Mayim (water) stands for Torah,the first five books of the Bible (Pentateuch). The idea and metaphor is that the earthy Torah (Bible)is a reflection of the Heavenly Torah.

Of course, scientifically, dealing with light and reflected light and water falls into physics and to some degree chemistry.

The chemical compound for pure water is H2O, which means two atoms of oxygen plus one of hydrogen creates a molecule of water. H2O is a compound that is binary in that it only uses two types of atoms, oxygen and hydrogen.

The religions of Taoism, Buddhism and some major ideas in Hinduism are theologically binary. Think yin-yang and that becomes clear. There are strong binary theological principles in the Abrahamic religions, too, such as the concepts of good and evil and the blessings or curses (consequences) that are promised when one follows the teachings or chooses not to in both the Hebrew and Christian testaments.

The special typescript that all Torah scrolls are written in is called Torah font, only in the Torah do crowns appear over special letters that are considered basic. In prayer books and Hebrew Bibles, and other Hebrew books based on scriptures, Torah font is also used, only without any crowns.

Torah font is a binary font wherein every letter is composed on one or more of only two letters, the comma like yud and the spear like vav. Thus a Torah could be decoded as a binary code, with each letter representing a specific number of yuds or vavs. The first five books of the Bible would thus be very much like a computer code. It is possible that pictures could emerge as digital images are bits and bytes of binary code. The pictures created by the digital code might have nothing to do with the story of the font. For instance, translating the letters of the story of Noah’s ark into binary code may produce a program or an image tha may have nothing to do wth the Flood- or maybe it does! However, that project is beyond my own coding skills.

Post Conceptual UnGraven Image Art theory uses binary symbol-strokes from original Hebrew texts. The strokes (letters) symbolically represent the smallest essential pre-matter, which elementary physicists call strings. That the Hebrew letters spoken by the creator represent the essential building blocks of the physical universe is also elementary theology held by all branches and denominations of the Jewish and Christian faiths and I am told this also is in the Qur’an.

The essential bit of information for an artist is a stroke. The essential bit of information in Hebrew,and hence the Hebrew Bible, is also a stroke, as both the yud or vav is made with a single stroke, and all letters, then words are made of  them. In computer science we have bits and bytes. When an artist’s stroke is a symbol that purposefully references the intrinsic depths of information, the stuff the physical universe is made of it, the painting mimics the formation of reality itself. It is a new way of painting combining ancient theology with constantly emerging elementary physics theory. It is art of the information age.

Einstein said he wanted to know the mind of God. Computers are minds that are binary As we decode the bits of data, the smallest pre-particles membranes that inform and form the perceivable physical universe perhaps we will understand the mind of God, or at least more about creation and the physical universe… Understanding involves more than the narrative scene we perceive, it is focused on the knowledge of what underlies, creates and sustains reality.

Post Conceptual UnGraven Image Art theory is based at the intersection of ancient spiritual wisdom and cutting edge contemporary science. It shows us a new and enhanced spiritual and science based way to see the world. It is a life changing vision that can even become an actual new way of seeing that is a fulfillment of biblical prophecy. Can this be true? See for yourself. See more.

One Reply to “Binary Aspects of Water & the Heavens in Science, Theology & UnGraven Image Art”