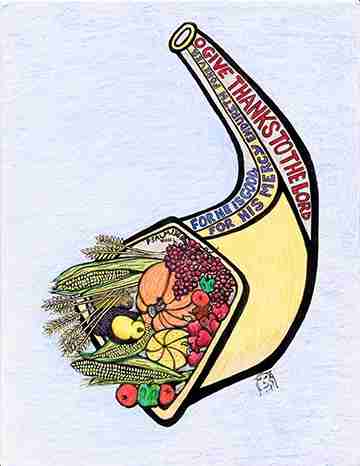 What is a Shofar and what does it have to do with Thanksgiving?

A shofar is a kind of trumpet made from a ram’s horn. It announces Rosh Hashanah, which is also called the feast of Trumpets.  Rosh Hashanah has become known today the Jewish New Year.

Rosh Hashanah third most significant religious holiday after Yom Kippur and the
Passover. It is celebrated as the Jewish New Year. It’s a civil new year, the beginning of a time when debts of goods, services, and favors are repaid or forgiven, debts are settled, relationships between people are at least attempted to be set right, a time of forgiveness and renewed relationships, plus it’s when the Jewish calendar changes the date of the year.

This makes sense as for an agricultural society, one’s wealth is based on the abundance of one’s harvest. Wages can be paid, debts can be repaid, goods and services can be contracted looking forward to the coming year.

23” And the Lord spake unto Moses, saying,

24 “Speak unto the children of Israel, saying, In the seventh month, in the first day of the month, shall ye have a sabbath, a memorial of blowing of trumpets, an holy convocation.

25 “Ye shall do no servile work therein: but ye shall offer an offering made by fire unto the Lord.”

The month of Tishrei fell during the ending of the harvest season in ancient Israel.  Similarly, the Thanksgiving of the Pilgrims to the new world was held towards the end of their harvest season.

An “offering made by fire unto the Lord” was an animal sacrifice. Back in the times of the Tabernacle and later the Temples, animals denoted wealth. In those agrarian times sacrificing a perfect member of one’s livestock was giving away one’s time, effort, and wealth.

Animals were first humanely slaughtered. They were not burned to death. They were cooked over the fire. Cooked because at the gathering time of Rosh Hashanah, Yom Kippur and Sukkot there were many people to feed, in addition to the Levites. The feast of trumpets remains to this day a time for people to gather and have a festive meal.  This is a lot like our Thanksgiving celebration today. That centerpiece turkey – that’s today’s burnt offering!  The pilgrims got the idea for their communal meal from the Bible that they faithfully read.

The blast of a shofar is an urgent wake-up call. It sounds much like a modern ambulance siren.  The shofar blasts are sounded intermittently during services at Rosh Hashanah. It is considered both a blessing and good deed to hear them.  It is a call to give thanks.

What is a Cornucopia and what does it have to do with Thanksgiving?

A cornucopia is also a horn that grows on a head. The word Cornucopia come from combing two Latin words Cornu means horn and copia, means plenty.

The cornucopia has different non-biblical roots. Our understanding of a cornucopia as a “Horn of Plenty originated in ancient Greece. It was adopted by the Romans who basically took aspects of Greek mythology and renamed those Gods as their own. Then the Romans spread their culture to all the lands ad people that they conquered, except for the Jews. Rome tolerated Judaism to keep the peace for as long as the land of Israel submitted to Roman civil authority.

Both Greek Myths involve the breaking of a horn. In the first, the God Zeus, as a baby breaks the horn of the goat who was nursing him. In the second, Hercules (the demigod son of Zeus), breaks the horn of Achelous, the river god during a battle. After the braking the horns become symbols of unending nourishment, the harvest and nourishment. The Hercules story then involves Greek goddesses, earth Titan Gaia, goddess of luck, and later Annona, goddess of the grain supply to the city of Rome.

The above painting, Abundantia with a cornucopia, by Peter Paul Rubens, is an allegorical depiction of the Greek goddess of abundance. Can you see that the cornucopia is a ram’s horn, also known as a shofar.

Under the rule of the Holy Roman Empire the peoples of the conquered lands were “converted” to the Latin form of Christianity. The cornucopia became “adopted” by the Celts and most of European continent. The Latin gods brought by the Romans were renamed and changed into the names of Christian saints. Instead of worshipping the Roman Gods, people prayed to Jesus and the father but also to patron saints. For example, Saint Isidore is widely venerated as the patron saint of the harvest, land, farmers, peasants, day laborers and agriculture in general, as well as brick layers.

The image of the cornucopia overflowing with harvest vegetables, grain and flowers was familiar to the early European settlers in the New World. As Thanksgiving continued to be celebrated, decreed by President Washington, and then established as a legal holiday under President Lincoln the use of the cornucopia became common.

Is the Shofar Cornucopia a Shofar or a Cornucopia?

It’s both. Both a shofar and Cornucopia are are types of horns. Granted the cornucopia has been more modified and usually is a kind of woven basket.

Both Thanksgiving and the biblically commanded holidays that are still celebrated by Jew are holidays for giving thanks.

The Shofar Cornucopia artwork features — in both English and the original Hebrew the scripture verse:

“O give thanks unto the Lord; for he is good: for his mercy endureth forever.”

Celebrate the fall harvest holidays of Thanksgiving, Rosh Hashanah, and Sukkot with Scripture Art from Judy Rey Wasserman.  Bless your place or share a gift this a black and white artwork. It’s ready to frame — or make it uniquely your own by using it as an adult coloring page.

The colored-in version currently available for as a PDF printable to download at the Art of Seeing The Divine Shop. https://artofseeingthedivine.com/product/shofar-cornucopia-aleph-colored/

Check out the Fine Art Limited Editions and God’s Word open edition prints, books, and printables that are currently available to you through Judy Rey’s Art of Seeing The Divine Shop. You don’t have to buy to avail yourself of the art and inspiration available there. However, if you select to collect investment quality archival art, or decorate your home with images created with strokes that are original letters from Bible texts, or buy a gift for someone special, there is a secure shopping cart that accepts most credit cards so your purchase is easy to accomplish. https://artofseeingthedivine.com.