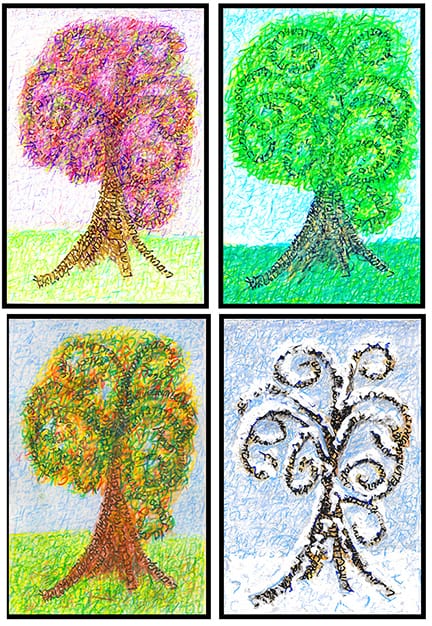 Can landscape art increase memory and cognition? It appears that is can according to recent scientific finds.

According to the Bible, humankind began in the garden of Eden. This makes sense to us, as all the land we inhabit in our increasing urbanization began as a garden, woods, or desert. As best we can, humankind, or what we call civilization turns the deserts we inhabit into gardens, or at least we plant trees and work to landscape our properties with plants. I used to live in Phoenix, Arizona, which was inherently a desert. Many people with severe allergies flora allergies had moved to Phoenix to escape their allergies in the desert environment. However, other people had moved to Phoenix, which offered and escape from harsh winters and a growing economy. Those people planted trees and familiar plants in their gardens landscaped to Phoenix. By the 1990’s people with allergies to evergreens, Oak, Maple, and other trees hat are not native to that desert were again experiencing their allergies.

At the same time Phoenix was becoming increasingly urbanized. Downtown skyscrapers were springing up. This trend has continued to this day with Phoenix becoming urbanized..

According to a paper by Heilig in 2012, urbanization continues to s progress rapidly around the globe. Over half of humanity currently lives in urban areas. This proportion is expected to exceed 70% by 2050. Human kind’s This unprecedented shift from rural to urban living brings a likewise unprecedented shift from seeing nahual landscapes associated with farming and rural economies, and other natural landscaped, such as seascapes, to mainly viewing urbanization. (Skár and Krogh, 2009, Turner et al., 2004).

Scientific and social studies are revealing that there is a connection between our increasing problems with mental health and memory loss and increasing urbanization. Apparently we humans thrive better when we are exposed to views of nature, from or windows and nearby parks, but also including art landscapes placed where we live, work and in schools.

Businesses, schools, homes for the elderly, and many offices could benefit the people who visit or work in them by having images of natural scenes decorating their walls. Is it possible that we can all improve our cognitive performances by displaying images of natural environments on our homes?

Studies again show that vision, and what one sees strongly impacts memory and cognitive ability.

In two studies conducted at the University of Michigan, Marc G. Berman and colleagues tested the effect of a walk’s scenery on cognitive function (Berman, Jonides & Kaplan, 2008 ). In the first study participants were given a 35-minute task involving repeating loads of random numbers back to the experimenter, but in reverse order. After this special task in cognitive psychology the subjects went for a walk. One group walked around an arboretum and while the other walked down busy city streets. Both groups were tracked with GPS devices.

The memory tests were repeated upon their return.

The results showed that the test group which took a walk in the tree lined natural surroundings improved in memory performance by almost 20% The subjects who walked in the busy urban scene did not improve to a reliable extent.

The arboretum is located in the City, near the university as the selected urban street. Thus, the traffic sounds, sirens and noise were similar. Being outside on the same day within walking distance the groups experience the same weather, and many of the same scents. What differed significantly was what each group perceived visually.

The second study homed in on that difference. This time participants remained in the lab. One group of participants was shown images of natural scenes of trees and fields while others looked at urban images of lampposts and streets.

Then they were again tested in relation on short term memory retention using random numbers. Once again, the study subjects who were exposed to the images of natural environments of trees and fields showed marked improvement over the other study group; however, the improvement was slightly less.

In the second study participants weren’t even allowed to leave the lab but instead some stared at pictures of natural scenes while others looked at urban environments. The improvements weren’t quite as impressive as the first study, but, once again, the trees and fields beat the roads and lampposts.

These results replicated a previous study by Berto (2005) , which concluded that just viewing pictures of natural scenes positively affected cognitive function. This study noted that an individual’s performance was soon restored by picture of trees, fields and hills, but not by streets, industrial units or even complex geometric patterns.

Clearly, our environments influence us visually. We can influence our own lives, and those of our family, friends, clients, customers and teammates by displaying images that do more than decorate. Once again, proof that art can change lives. Art can enhance brain functioning.