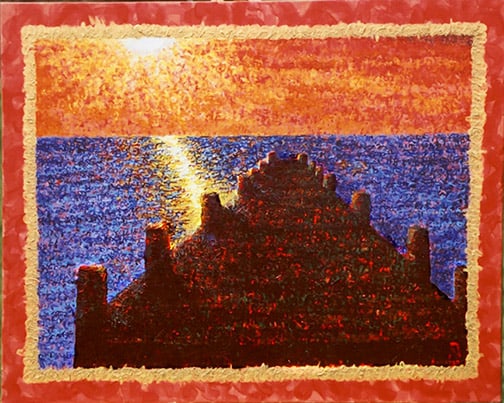 “Then will I sprinkle clean water upon you, and ye shall be clean: from all your filthiness, and from all your idols, will I cleanse you.”

What is the Symbolism of Water in the Bible?

In the Bible, water, which in the original Hebrew text is the word mayim (pronounced, my-eem), represents Torah (also known as the Pentateuch), which means the written Word. It can also be considered that water can symbolically represent the written Word, known as the Logos by Christians throughout the whole Bible.

There are obvious properties of water that apply:

Water as a Symbol

Water as symbol for the Word of God means that when water is described in a Bible story, it stands as a kind of secret code for the Word of the LORD God. Thus, when the tribes of Israel cross over the Red Sea into the Sinai desert, the story also indicates that the Word parted, creating a safe path, which next floods in and engulfs and drowns the non-believing Egyptians who pursued the newly freed slaves. This is a extremely significant metaphor as Moses is credited with writing the first five books of the Bible.

That echoes the flood in the time of Noah, when everyone drowned except for Noah and his family who safely rode upon the water in the ark while the rest of humanity were overcome by the waters of the flood. Symbolically that flood was a flood of the words of the Lord God who previously in Genesis 1 had spoken light, and then the rest of the physical universe as we know it, into existence.

For Christians, when Jesus walks upon the water reaching the boat carrying his disciples, the visual metaphor shows that Jesus is standing on the flowing Words of Torah. Every disciple in that boat was a somewhat learned Jews, so they had to understand that symbolism.

Painting Water with the Words of the Bible

Generally, when I paint water, I always and only use the letters of the texts from the first five books of the Bible for the strokes. This is especially true for my paintings in the Genesis Sunset series. In the Dock Less Traveled, the water, as well as the dock and sky are all painted with strokes that are the Torah font letters of Genesis 1-2:7, as is the background. The gold “frame” is created with the words of a psalm.

This painting was created according to the tenets of Post Conceptual UnGraven Image Art theory. From the art Manifesto of UnGraven Image Art, “According to theology commonly held by all branches and/or denominations of Jews and Christians, when the Lord G-D speaks the universe into existence, at the very beginning of the Bible, the letters of the Creator’s spoken words — the tiniest elements of those words — are also the tiniest elements of our physical universe. According to contemporary science, elementary physics, the tiniest elements, the building blocks of our physical universe are called strings. There are amazing correlations between science’s strings and the original letters and words of the Hebrew Bible, which is in Torah font.”

Where I live there are many lakes nearby, and many private docks. Some of the docks are longer, others are shorter. There is no standard dock; each is unique. The poetic imagery of this that each of us has a unique personal walk with The Divine over the Word.

We can walk as far as the end of the dock or use the dock to gain access to a boat that can take us far out into the waters, or we can jump off the dock and swim in the water.

Look at the image above of the Dock Less Traveled imagine yourself at the moment of stepping onto the dock. You are surrounded by the word. Everywhere you look or step is created by the Word and embodies it. How would that be for you?

Check out the UnGraven Image Scriptue Art Fine Art Limited Edition prints, Bible Texts Decorative Art prints, books, and UnGraven Image Art printables that are currently available to you through Judy Rey’s Art of Seeing The Divine Shop. You don’t have to buy to avail yourself of the art and inspiration available there. However, if you select to collect investment quality archival art, or decorate your home with images created with strokes that are original letters from Bible texts, or buy a gift for someone special, there is a secure shopping cart that accepts most credit cards so your purchase is easy to accomplish. https://artofseeingthedivine.com