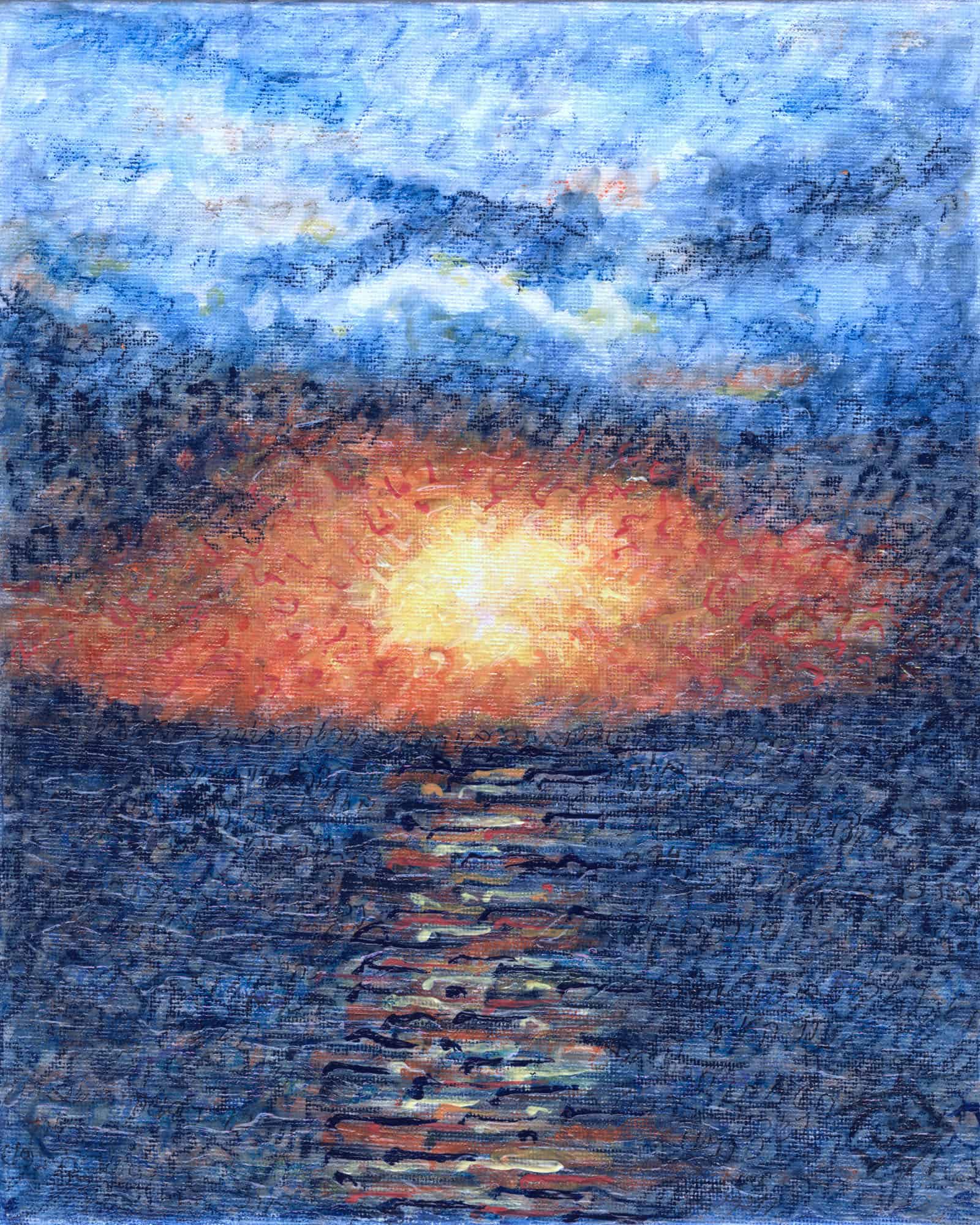 My greatest Aha! Moment kind of crept in on me, and I continue to fall up into it.

It totally turned my life around. Aside from being a mother and now grandmother, it became my life’s mission. It changed the way that I actually see the world and as an artist, my mission is to share that vision so others can see the world in a more meaningful way, full of inspiration, possibilities and blessings.

Essentially, I experimented with the idea of using symbols for ever stroke in a painting. Artistically, it is a next step from Conceptual, especially Word Art.

However, the theology that this idea comes from is ancient, held by every branch and denomination of Christian and Jew (comes from Genesis 1), mentioned in the Koran, references concepts of duality important to Buddhism, Hinduism and the Tao, plus other paths. The idea is that when the Creator speaks the world into existence, the letters of those Words are (or represent) the essential building blocks of the physical universe.

Back when I was a teenager and then into my early twenties, when I was an art student, I had tried to create works that would show the atomic structures surrounding us, using images of molecules that I tried to form together to form an image, such as a landscape. I realized it would only work if I painted on a truly massive scale, works that were as large as multi-storied apartment or commercial buildings.

Still, I wanted to depict the smallest matter, now scientifically understood to be pre-matter energy called strings or branes in elementary physics. So, thinking of Pissarro and the Impressionists who worked to paint and show the light, one late summer day a few years ago I picked up my paintbrush began to show the energies that make up the physical matter of the world by using the original letters Bible texts for every stroke. My first painting was a small, 9 x 12 inches of a sunset over a mountain.

Like all artists, after a while of my painting experiment I stood back from the small painting to view the work. That’s when I had my Aha moment. It worked! There was definitely a sunset, but just as obviously there was something in the very strokes, their shapes, the way the overlapped that drew attention to their intrinsic importance. I was visually depicting how the energies (for some the words of God) create now and always the world.

I did not realize it then, but my life and every thing I had studied or done professionally was needed for my new mission, from my career as a writer, to creating and giving seminars, my acting training for TV and film, sales jobs, and of course, my work as a spiritual counselor.

There continue to be many more Aha! moments in this new way of creating art, a new theory that I am now actively founding and working in as an artist. For instance, I learned that most elementary physicists agree that there are 11 basic pre-matter strings in our dimension of the universe while their opposites (11 more) exist in other dimensions. When I discovered that Torah font Hebrew seems to be the only binary phonetic font in any of the world’s languages. And the font is binary it two ways: first every letter can be formed using one of more of two one-stroke letters, the yud or the vav; second, that every letter can easily be written with one or two strokes. I cannot do that with English, which is the language I speak. Having a binary font is important as the symbols always also reference important concepts and applications in science and mathematics, as well as spiritual concepts of duality. A phonetic font references the sound vibrations of both the Creator’s Words and physics’ strings.

So I am painting sound, music, energy and a new vision of how to see the world we can all share, whatever our beliefs or backgrounds. It has changed the way I see the world, including the dishes in the sink, the pile of laundry, the accident I pass on the road, etc. I have learned to “see” the energies, the words, everywhere, now and always – and the always present inspiration, possibilities and blessings.

One Reply to “Aha! Moment – Beginning to See the World in a New Way”